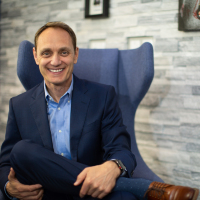 Timothy Wenhold is equal parts entrepreneur technologist. Wenhold turned down a scholarship to the University of Pennsylvania to begin his journey as an entrepreneur. He founded his third company, Sintaks, in 1985, sold it to Canon in 1998, and then started and grew three more companies. In 2007, Power became a client of Wenhold’s systems innovation company, Data in Motion. Wenhold learned every intricacy of the company in order to architect the best, most relevant technology, impressing Power leadership every step of the way. In 2012, Wenhold joined Power full time as their Chief Innovation Officer and in 2017 became a partner.

In his role, Wenhold is responsible for all aspects of technology, including NITRO, Power’s unique, state-of-the-art collaborative intelligence platform that enables seamless, real-time communication across Power’s 21 states and thousands of employees. Wenhold is focused on innovating for the future, continuously developing the technical strategy and human capital to support Power’s rapid growth. He oversees an international team of creators, including developers, engineers, and designers. Under Wenhold’s leadership, technology has been integrated into Power’s cultural fabric, creating a true digital identity across the entire company.

Timothy's educational background doesn't start in a top university. In spite of having a scholarship to the University of Pennsylvania, Timothy decided to tackle life first—going on the road with a band and financing the tour himself. After a year of truly experiencing life, Timothy returned home in debt and needed to figure out his next move. After a series of jobs in varying industries from aerospace to engineering, he found his home in computers, technology and innovation. In 1985 he founded Sintaks, a regional systems integrator working with clients such as ARAMARK, GMAC, SEI, etc. After growing the company for more than 10 years, Timothy sold Sintaks to Cannon in 1996 as Cannon viewed this acquisition as strategic to their goal of connected devices. The entrepreneur bug had taken hold of Timothy, so he went on to start, grow and sell multiple technology companies, laying the groundwork for the creation of Data In Motion, a systems innovation company. Power became a customer of the company in 2007 before finally integrating the company fully into the technology division of Power in 2012. Timothy currently resides in Collegeville, PA.