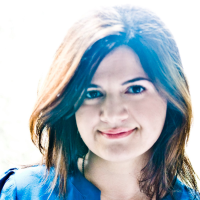 Sara Mohazzebi is the founder of Think Free Productions, a media and production company committed to promoting stories of diversity, equality, and thinking outside the box in a variety of formats including digital media content, documentary shorts and series, commercials, music videos, and scripted television and film projects. Known as a leading expert in social good, arts/subculture, and innovative entrepreneurial coverage, Sara has consulted for wide range of high-profile and award-winning nonprofit organizations, and advertising agencies including Saatchi and Saatchi’s Team One and Shine On Sierra Leone and is a speaker and moderator at popular media and tech conferences. At Think Free, she brings her expertise and experience as a former social good and culture journalist to her current directing and executive producing slate.

Prior to Think Free, Sara was the editor-in-residence for the launch of the digital division of Reese Witherspoon's production company Hello Sunshine. During her residency, Sara created and directed the original limited docu series Turning Point with co-producer and director of photography Alexis Casson featuring Amanda DeCadenet of Girl Gaze, designer Melody Ehsani, and Style Seat CEO Melody McCloskey. She also created the written series The Storytellers where she interviewed a spectrum of female storytellers about their creative process such as author Elizabeth Gilbert, television writer and director Gail Lerner of ABC’s Blackish, feature film and television costume designer Mona Many, EVP of Marvel Studios Victoria Alonso, director and activist Abigail Disney, and novelist Emily Giffin. Additionally, she created the monthly original essay submission series where the public can submit their personal essays and be published on Hello Sunshine's digital platforms.

For the past decade, Sara has been an international journalist and producer and has travelled the world covering the endeavors of social good activists, cultural influencers, icons, and A-list entertainment talent. With a reputation for reporting from refugee camps to red carpets, her work has been published in numerous popular domestic and international media outlets including The Daily Beast, Esquire, Marie Claire, Teen Vogue, Emirates Woman, + PopSugar. Sara was also the syndicated columnist + host of the series Up To Real Good, a column dedicated to socially conscious brands with a global give back to women and children’s health and development for TakePart World (Participant Media’s news division). Sara has also written for and been commissioned by the United Nations World Food Programme and the Montblanc Signature For Good initiative in addition to being a global culture correspondent for Puma Social.

Sara has an MFA in Film Producing from the American Film Institute and is the recipient of the Amy Bloch Producer Fellowship for producing excellence. She also has a B.S. in Film + Multimedia Production from Drexel University.

Her favorite word is yes.