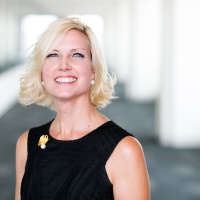 As the Atlantic Outreach Liaison for the U.S. Patent and Trademark Office (USPTO), Elizabeth Dougherty carries out the strategic direction of the Under Secretary of Commerce for Intellectual Property and Director of the USPTO, and is responsible for leading the USPTO&#39;s east coast stakeholder engagement. Focusing on the region and actively engaging with the community, Ms. Dougherty ensures the USPTO’s initiatives and programs are tailored to the regions unique ecosystem of industries and stakeholders.

A 27 year veteran of the USPTO, Ms. Dougherty previously served as the Senior Advisor to the Under Secretary of Commerce for Intellectual Property and Director of the USPTO. In this role, she worked closely across the Agency's leadership to implement the policies and priorities for the USPTO. She began her career at the USPTO as a patent examiner after graduating from The Catholic University of America with a bachelor's degree in physics. While a patent examiner, Ms. Dougherty went on to obtain her J.D. from The Columbus School of Law at The Catholic University of America and served as a Senior Legal Advisor in the Office of Patent Legal Administration for a significant part of her career. Over the years, she has also served in the USPTO’s Office of Petitions, the Office of Innovation Development, and the Office of Government Affairs. Ms. Dougherty has dedicated much of her career to the USPTO's outreach and education programs focusing on small businesses, startups and entrepreneurs. In this effort she has developed, implemented, and supervised programs that support the independent inventor community, small businesses, entrepreneurs, and the intellectual property interests of colleges and universities. Similarly Ms. Dougherty has spearheaded a number of special projects with federal, state and local governments, and private organizations to promote and support invention and innovation in the United States.