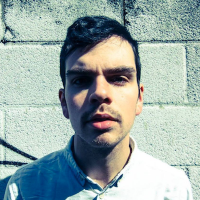 Conrad Benner is a photographer, podcaster, curator, and founder of StreetsDept.com, a photo-blog that discovers art on the streets of Philadelphia. Conrad’s blog has been named one of the ‘Best Blogs for Travellers’ by The Guardian, and his photography highlighted by Mashable and Instagram, as well as printed in Time Magazine and the Encyclopedia Britannica.

Conrad has used his growing influence not only to celebrate Philly’s burgeoning arts scene, but also to affect change. Most notably with his successful #SEPTA247 campaign, in 2014, which pushed the South Eastern Pennsylvania Transportation Authority (SEPTA) to reintroduce overnight weekend service to Philadelphia’s elevated and subway trains. As well as with his work on Next Stop: Democracy, a Knight Cities Challenge winning project, which aims to increase voter turnout in Philly with the help of local artists. And his work in 2016 with Covenant House Pennsylvania to create #AmICutOut, a pop-up art installation to help raise awareness and money to end youth homelessness in Philadelphia. And in the Trump-era, with his work co-organizing Signs of Solidarity, an inauguration day public art protest in opposition to hate and in protest of any and all that embolden divisiveness; co-organizing Collective Action, a silent art auction which raised over $23k for 10 local and national social justice organizations; and curator and organizer of Revolutionary: A Pop-Up Street Art Exhibition, a six-week exhibition, commissioned by Visit Philadelphia, which featured the work of 13 contemporary Philly-based artists who are challenging the current political and social status quo installed at 13 locations across Philadelphia’s Historic District.

Born and raised in the heart of the Fishtown neighborhood of Philadelphia, Conrad has indeed eaten a WAWA hoagie for breakfast before, and on many occasions, and he’s not mad about it.