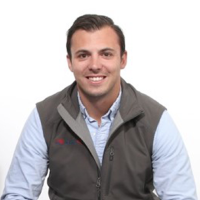 Christopher Molaro is a 2010 graduate of USMA where he graduated with a degree in Engineering Management and commissioned as a Field Artillery Officer. He deployed with the First Cavalry Division as a platoon leader to Iraq in 2011 and was awarded a Bronze Star. In 2017 he earned his Masters in Business Administration from The Wharton School at The University of Pennsylvania. He is now the founder and CEO of NeuroFlow, a digital mental health technology company used in hundreds of clinics and hospitals that was recently named a top mental health company by MedTech Boston and most innovative technology by the 2018 Psych Congress. He resides in Philadelphia with his wife, Erica.