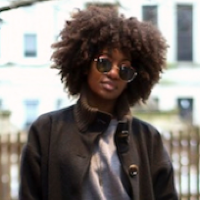 Alexis is a forward thinker and autodidact. She is a writer, producer and director with over 9 years of experience in various aspects of television and digital production - including shooting and editing. Having worked with companies and brands such as HBO, VH1, CBS, The Food Network, Coach, Hello Sunshine, etc… Alexis specializes in creating premium content, both scripted and unscripted - including short and long form branded, lifestyle and docu-series'.

In 2012, Alexis created an award-winning documentary series called, "The Peculiar Kind." It has been shown around the world, including a special exhibition at the Tate Modern and over 50 colleges and universities, including Yale University, Brown University and the University of Sydney. Soon after it's premiere Alexis partnered with Afropunk and was also asked by Model, Activist and 2013 TED Talk Special Curator, Cameron Russell, to give a TED Talk about the need for multi-hyphenate diversity in film and television.

“The Peculiar Kind” is an excellent series-turned-documentary project that encourages widespread conversation concerning every inch of the fight for gender parity and LGBTQ equality within the framework of civil rights. With the permission of its producers, the “Peculiar Kind” documentary is available for screenings. - Indiewire

Currently, Alexis is freelancing, writing a YA dramedy for network television and continues to working with her talented colleague, creating innovative content.